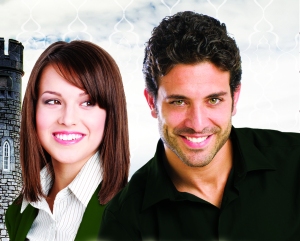 Rick Bonito’s uncle supposedly drowned five years ago and his body was never found, but something did not seem right about the report. Uncle Antonio was an excellent swimmer. His disappearance seems quite suspicious to Rick’s father. He never felt the complete truth had come out about his brother. It is now up to Amelia and Rick to find out the truth about his uncle.

“In the Amelia Moore Detective Series, the author delivers a delightful, fairly fast-paced tale in the pursuit of a missing person, for that’s what Amelia’s agency specializes in. This time it is personal, as Rick’s Uncle Antonio Bonito dies in suspicious circumstances. But what do lighthouses have to do with his disappearance? The reader gets a brief education into lighthouses, their importance in the past and the interesting uses they have today.” —Sandra Olshaski, Library of Clean Reads

While searching for Rick’s uncle, they visit some interesting places. Below is a tall and beautiful lighthouse, which guided mariners to safety and away from danger.

The light navigated them through rough storms if they followed it. It represented security, warmth, and safety.

While searching for Uncle Antonio, Rick and Amelia enjoyed themselves along the way. They stopped off at a 50s cafe. Rick showed off a few fancy steps and said he would teach Amelia some of the fun moves.

They enjoyed cruising toward a few lighthouses on an oriental houseboat. It was such fun.

When they went to Pigeon Lighthouse in California, Rick and Amelia were in awe at the beauty of the scenery and sunsets.

Here’s a bit of trivia: Decommissioned lighthouses go up for sale every now and then. And if you’re in the market, you can get one for a good deal. In other words, it’s been removed from being an active lighthouse and is no longer needed. The government can sell off a lighthouse for as little as one dollar, but there’s one stipulation for buying it. The new owner has to refurbish it and make it look just like new. That can cost thousands upon thousands of dollars, and there’s no way of getting out of it. The National Historic Lighthouse Preservation Act of 2000 requires the buyer to maintain the lighthouse or it can be taken away from him. How fun to live in a lighthouse!!!

To buy this book, visit Amazon.